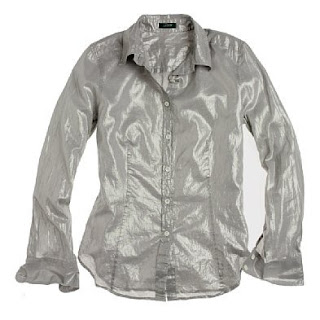 It doesn’t matter that the CS rep I spoke w/pronounced lame’ as layme. The blouse is beautiful! A nice pop of shine underneath the dream tie cardigan:

And when I called the next day to order the lame’ in shell, that CS also thought the blouse is layme. I am sure the shell color will be beautiful and not lame at all. 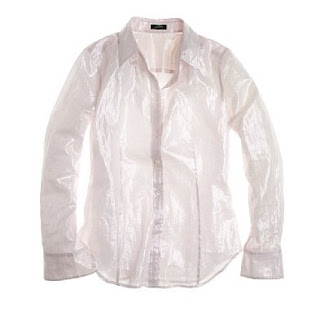 I will try to post the IRL version upon receipt. Although at $19.99 these may be gone very soon. In the meantime, here is what kate! had to say on J Crew Aficionada:

“…i just received my whisper lame shirt in shell yesterday! i completely agree with your post of the fit/style/itchy factor. BUT the shell color is NOT AT ALL what it looks like online. in fact i called CS and asked if i could return it (i have never done that before). after explaining to the cs that it honestly doesn’t look like the online color at all she said I could just this once. its not the beige-y soft color it looks online, it is a full on PINK color. ie its the color of a light pink dress shirt. might work for some, but i felt like a barbie with it on. 🙁 hope that helps someone!!”

More about the blouse — I like shiny things, but I wouldn’t say I’m a girly girl. This has a subtle shine/sheen and still makes a statement. It kind of looks like a regular gray button down and then your fairy godmother came and put a shimmer all over it so you could go to the Upscale Casual Ball. If you wear it solo you don’t have to worry about looking like a disco ball, imo. It’s just not loud enough. And it looks really great underneath other tops & jackets. I am a 4 or 6P, 34C. I ordered a 4 and am thrilled with it. I would have been unhappy with a 6. So I’d say TTS.

The fabric is lightweight and just a tad see through. Not in bad way. It’s fluid and not stiff in any way. I think the gold lame’ tank is just a little heavier. Maybe gold thread is a little thicker. Who knows. And the gold lame’ tank has a zipper which makes that side of it stiff. There are no such issues with the button down.

The material is not itchy or scratchy on the tank nor on the button down. I have sensitive skin. And I also have some psychological issue where certain fabrics/texture give me the heebs and put pain in my teeth. “Look Ma, no heebs.”

Here is a pic to show a contrast between the interior and ext:

Notice how the interior doesn’t show the vibrant threading? It’s flat grey. So no itching. It’s 100% cotton so it’s not ‘noisy’ either since it’s not made of polyester.

The Georgia dress is on final sale for $39.99 in deep persimmon and bright blue. Black and grey mist are out of stock. I just recvd the blue (and put it on without ironing out the shipping wrinkles):

I have to say that I like the bright blue and grey mist Georgias. The black is a nice basic, but it’s a flat black and not as rich as I like. Still, a nice basic. I am curious about the deep persimmon but I figure 3 of these dresses are enough and the orange-y color might not provide any interesting contrast with my skin tone.

The bright blue Georgia is close to the bright azul Jackie cardigan. And no, the blue is not as shiny as the camera makes it out to be in this pic and on the web. 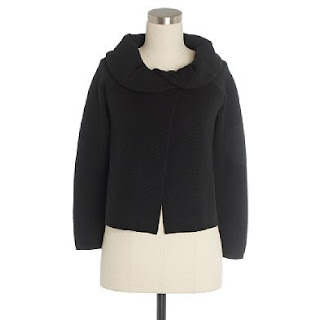 I tried this on and I immediately thought $50 max, H&M. I usually don’t compare J Crew to H&M because I don’t see a direct correlation. But in this case I immediately thought of H&M. I can’t see paying $148 for this. #1 – It’s wool, but too lightweight. The Jamie jacket is heavier, imo. I realize the Jamie is made of cotton, but still. #2 – The ‘jacket’ falls into an open stance. There is one button under the collar and that’s it. It’s cut into a tapered, open shape. There is no way to close it. I guess this is something you can throw on as a cute topper for nice weather fall days. I already own cardigans and other swing jackets that will do the trick. This is a pass for me.

This is the mysterious black dress I saw in a J Crew b&m. It is currently not available in the Oct 2008 catalog or online.

ETA: This is the Madeline dress

I tried it on and the collar is great. The ruffles are done better this year than on last year’s sparkle phoebe blouse – maybe because the material on that blouse is lightweight. I didn’t try on last year’s Phoebe dress in wool. In this year’s design there is a square of material to go across the cleavage and operational buttons down the front of it. It’s set between the ruffles and it appears that you can see cleavage, but you can’t. It’s sexy in that regard. The fabric on this dress reminds me of the Super 120s wool. It’s lightweight, but feels strong — if you will — and I didn’t find it itchy at all.

You pull the dress over your head and there is a side zip. There are also the requisite pockets, as many of the newer dresses have. There are princess seams at the rear but not at the front. It may have taken away from the look of the dress to have seams running down the front but I felt like the dress is missing some shaping at the waist. Maybe I am supposed to be in a size 2, but I don’t think so.